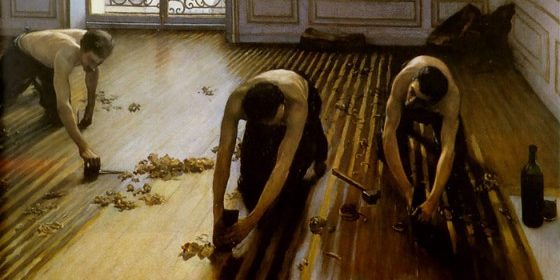 Before filing a petition to sponsor a foreign national for an employment-based immigrant visa, the employer must establish that there will be no adverse impact on the U.S. labor market. This is accomplished by undergoing a labor certification through the U.S. Department of Labor. To this end, Employment and Training Administration Form 9089, Application for Permanent Employment Certification, requires the employer to attest that they have either engaged with a bargaining representative for their business or otherwise posted notice of the job at the worksite so that any other “U.S. employees” have notice of the job opening.

The relevant federal regulations expressly exempt private households from this requirement, for obvious reasons. Unless your home is one of those colonial outposts with armies of staff running around, the requirement is pretty pointless. However, the form (which must be completed and submitted online) is not designed with private households in mind. The employer must input the number of employees at the ‘headquarters or main office,” and the menu will not allow an input of “0”. You have to just pick a number. So a certifying officer would see that, despite there being an ‘employee’ at the worksite, neither was a bargaining representative notified, nor was notice of the opening posted. And a particularly lazy certifying officer who doesn’t take the time to notice ‘oh yeah, this is for a private household,’ might be inclined to deny the 9089 on that basis alone.

This occurred to one of my clients seeking to employee a nanny who entered ‘1’ (the lowest possible entry) for onsite employees and ‘N/A’ to the questions regarding notice. My instinct was to simply reply to the denial by sending in a request for reconsideration stating “you dummy, there’s neither bargaining representative for a private household nor requirement to post notice in the kitchen, and your form doesn’t allow us to enter ‘0.’” Yet, I felt my duty of diligence owed to my client compelled me to dig a bit deeper. This fictional “1” in the number of employees section: who is he or she? Let’s assume it was the foreign national au pair then-employed there pursuant to a J-1 visa. Is the au pair a U.S. worker for the purposes of the 9089?

Is a potential employer required to post notice of the job in their own house? Firstly, let’s examine the purpose of the applicable regulations. Title 20 of the Code of Federal Regulations, section 656.10, General Instructions, at section (d)(2) instructs that: “In the case of a private household, notice is required under this paragraph (d) only if the household employs one or more U.S. workers at the time the application for labor certification is filed.” In our case, by answering “N/A” rather than “no,” the employer certified that the conditions triggering the notice requirement were not present in the household. So the notice requirement quite clearly only applies to households employing U.S. workers.

What is the difference between an “employee” and a “U.S. worker?” So is our fictional employee a U.S. worker?  In short, no. But indulge us here.

The terms “employees” and “U.S. workers” carry different definitions and are not interchangeable. Throughout the relevant PERM regulations, the foreign national beneficiary is frequently referred to as an “employee” who need not necessarily possess employment authorization to be eligible for an immigrant visa––such as a J-1 au pair. The regulations distinguish between “U.S. workers” and other “employees.”  For example, 29 CFR § 502.10, Definitions, at subsection (a) defines “employee” by function and reference to “the general common law of agency,” listing a number of factors that have no bearing on immigration status. The term “U.S. worker” is used throughout § 502.10(a) in provisions relating to wage protection, job opportunity, and recruitment, and it is separately defined according to employment authorization as “a citizen or national of the U.S.” or an immigrant “otherwise authorized to be employed in the U.S.”  The reason for the different definitions is made clear: a U.S. worker can be an employee, though an employee need not be a U.S. worker.

For this reason, the regulations governing private households seeking to employ a nanny distinguish  between “U.S. workers” and other “employees.”20 C.F.R. § 656.19(a), Live-in household domestic service workers, states that “[a]pplications on behalf of live-in household domestic service occupations are processed pursuant to the requirements of the basic process at § 656.17.” Section 656.17, Basic labor certification process, at subsection (l), Alien influence and control over job opportunity, addresses scenarios in which the foreign beneficiary “is one of a small number of employees” in addition to U.S. workers to whom the job opportunity must be made available. The 20 C.F.R. §§ 656.10, 656.19, and 656.17 regulations directly address scenarios in which notice of the job opportunity must be provided to U.S. workers in private households. Read together, they make clear that in private households that have “employees” but not “U.S. workers,” the notice requirements do not apply. Other regulations, case law, and agency guidance also distinguish between “U.S. workers” and other “employees”.  Indeed, employees must be distinguished from other U.S. workers to be consistent with other applicable regulations, including those pertaining to the Internal Revenue Code or other Department of Labor provisions.

Lastly, the 9089 itself reflects the distinction between “U.S. workers” and other “employees” in its question as to whether any laid off “U.S. workers” were notified and considered for the job opportunity sought and also in the required employer declaration that the opportunity has been and is clearly open to any U.S. worker––distinct from the verbiage merely inquiring into the number of “employees currently employed.” Our colonial outposts with armies of foreign national staff running around would remain consistent by noting them as employees on the 9089 while distinguishing them from “U.S. workers” as designated elsewhere on the form.

The foreign labor certification process is designed to protect U.S. workers from exploitation of the labor market by non-U.S. worker employees. Conflating the terms “employee” and “U.S. worker”  for purposes of notice requirement would  defeat that purpose and render the regulations, case law, and agency guidance that carefully distinguish these terms meaningless.

So that’s what we said instead. The denial was reversed and the labor application certified.